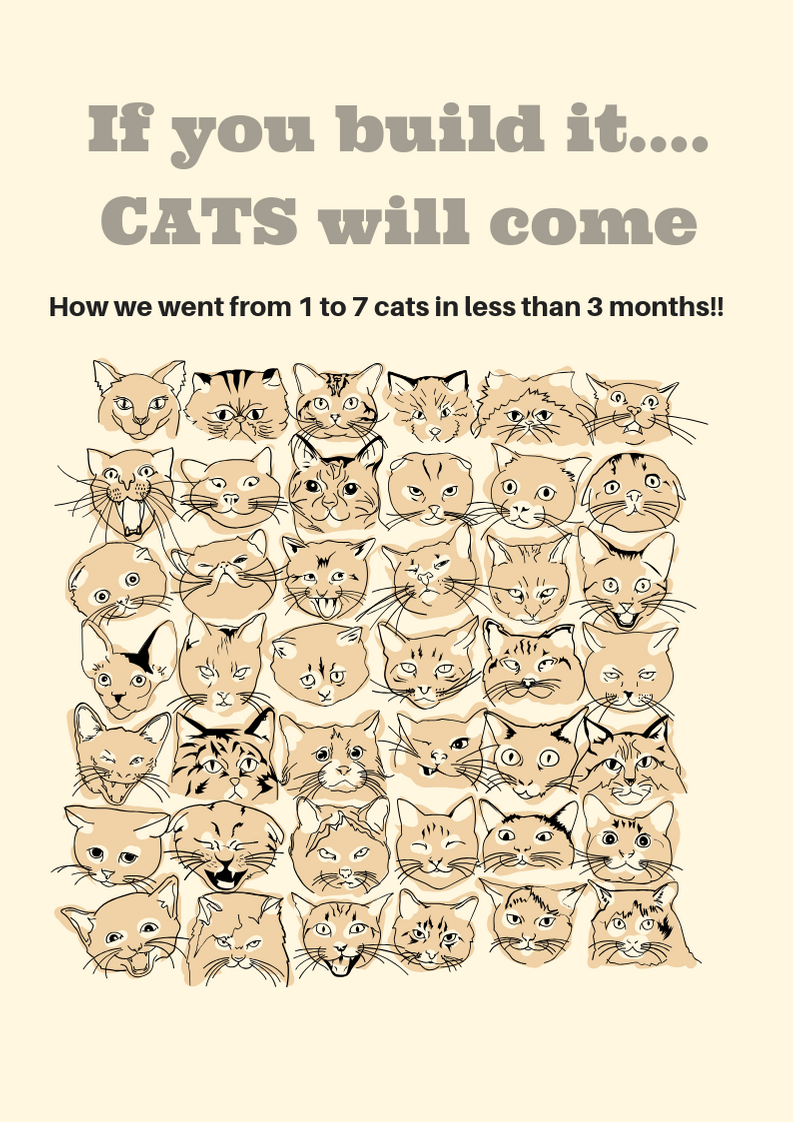 This is the story of how we went from owning 1 cat to 7 in just three months. Sometimes, the most exciting things are surprises….

We’ll start at the very beginning – 8 years ago we adopted our first cat. She is a silver/gray siberian forest cat. Big and hairy. Our children were young and she took full advantage of their willingness to answer her every call.

We had intended to be a “one cat” household forever. Around this same time, we also ran out of garden space. There are so many great plants in the world – some fantastically edible and unavailable in stores.  We wanted to grow those plants and figure out a way to make them more accessible to the world. So we started hunting for land.

A few years into the hunt, our six year old daughter was just learning to use a computer. She proudly showed us this “logo” she made for our future farm.

She said she imagined a place where all cats were welcome. Where they could live their lives “free” but still be cared for by people. And where we would grow apples….

It took 7 years before we found land we could afford. It wasn’t perfect (in fact, it’s a fairly hostile environment) but it’s where we started our business. We spent the first few years planting trees, cleaning up debris, and restoring a large sand prairie. Then we started preparing a space for honey bees.

We bought our kennel used – from Craigslist – and it came with a big insulated dog house.  We decided to put the dog house out in the pasture – facing south to prevent the winter winds. The rationale – if someone needed a warm home, they could use it. And they did…..

The first to arrive was Clipper – an orange tabby with six toes on each paw. She had a clipped left ear and a blue circle tattoo; indicating that she was a spayed feral.

She started out skittish but eventually warmed to us. She follows us as we do chores and appreciates being petted. She doesn’t like being picked up and when we tried to “move her into the house” she refused to use the litter box and begged at the door to be set free.

Soon after Clipper arrived, Shadow started lurking around. She also had 6 toes on each paw, a clipped left ear, and a blue circle tattoo. We would often find them curled up together in the house – yin and yang. They were clearly sisters. But shadow has only allowed herself to be pet a handful of times. She will not be “caged” and does not want to come inside. Here is a fuzzy picture of her out in the snow.

Word got out about our “little house on the prairie” and we started to see other cats show up. There are 3 unidentified cats that make semi regular appearances on our trail cameras- a white/calico, a black/white tuxedo, and small yellow kitten. None of these have been seen by us in the daytime and they clearly don’t want to be caught. So they are our “3 mystery cats.” Some day when I become a little more technologically advanced, I will transfer the trail camera footage to my computer so they can join this post.

If you are keeping score – Reya + Clipper + Shadow + 3 mystery cats = 6.  It took some time for us to realize that Shadow and Patchy were two different cats. Dark Gray/black slinking in the background. But Patchy was braver than shadow and she started allowing herself to be pet. That’s when we realized she did not have 6 toes or a clipped ear. She was a separate being.

Patchy is a shorthair/tortie mix, and she is adorable. Unfortunately, there started to be some battles at the little house. Clipper and Shadow teamed up against Patchy and at various times either Patchy or the sisters controlled the food/house – not allowing the other to visit.

So Patchy moved inside. She showed her ability to use the litter box, and a blue circle tattoo on her abdomen proved she was spayed.

Patchy + Reya + Clipper + Shadow + 3 mystery cats = 7 and the night is young! We are beyond grateful that these cats have found a home and/or shelter. We have bitter cold winters, and it’s hard on everyone.

How many cats is too many? Well – we are open to providing food/shelter for as many feral cats that come along, but the cats themselves seem to disagree. The battles between Clipper/Shadow and Patchy would have probably resulted in one or two of them starving/freezing to death or moving on. The other 3 are spurious visitors. Perhaps they come to see if the area is open “just in case” but move along whenever they sense the other cats. Maybe if we build another shelter we can accommodate more guests?

Time will tell. We have received a lot of enjoyment caring for these animals. They are spayed so they are not contributing to overpopulation, they do a great job killing mice (we have received many gifts….) and they are wonderful to have around. Here’s hoping a cat shows up while you are pruning trees, digging in your garden, or picking apples…. it’s a joy that can not be expressed in words.

**Update** One of the trail cam cats was seen during the day and allowed herself to be pet.

Keeping cats is a very enjoyable experience. And…it seems there are many cats in need of a home. They are very easy pets to care for, and they are relatively inexpensive too. There are only a few cat litter box supplies you need and food and water. They will gladly share your shelter, or you can make an insulated structure for them. They are grateful for our attention and care. And they give back in spades.